Innovation and creativity have transformed many inconveniences and struggles into simple, even fun tasks. Your groceries can be ordered directly to your door and a voice-controlled speaker in your living room can let you know if it’ll rain on your commute to work. As researchers in the prosthetics field, my team and I began to consider the ways we can make life easier for people adjusting to their upper-limb prostheses. Myoelectric training just became fun. 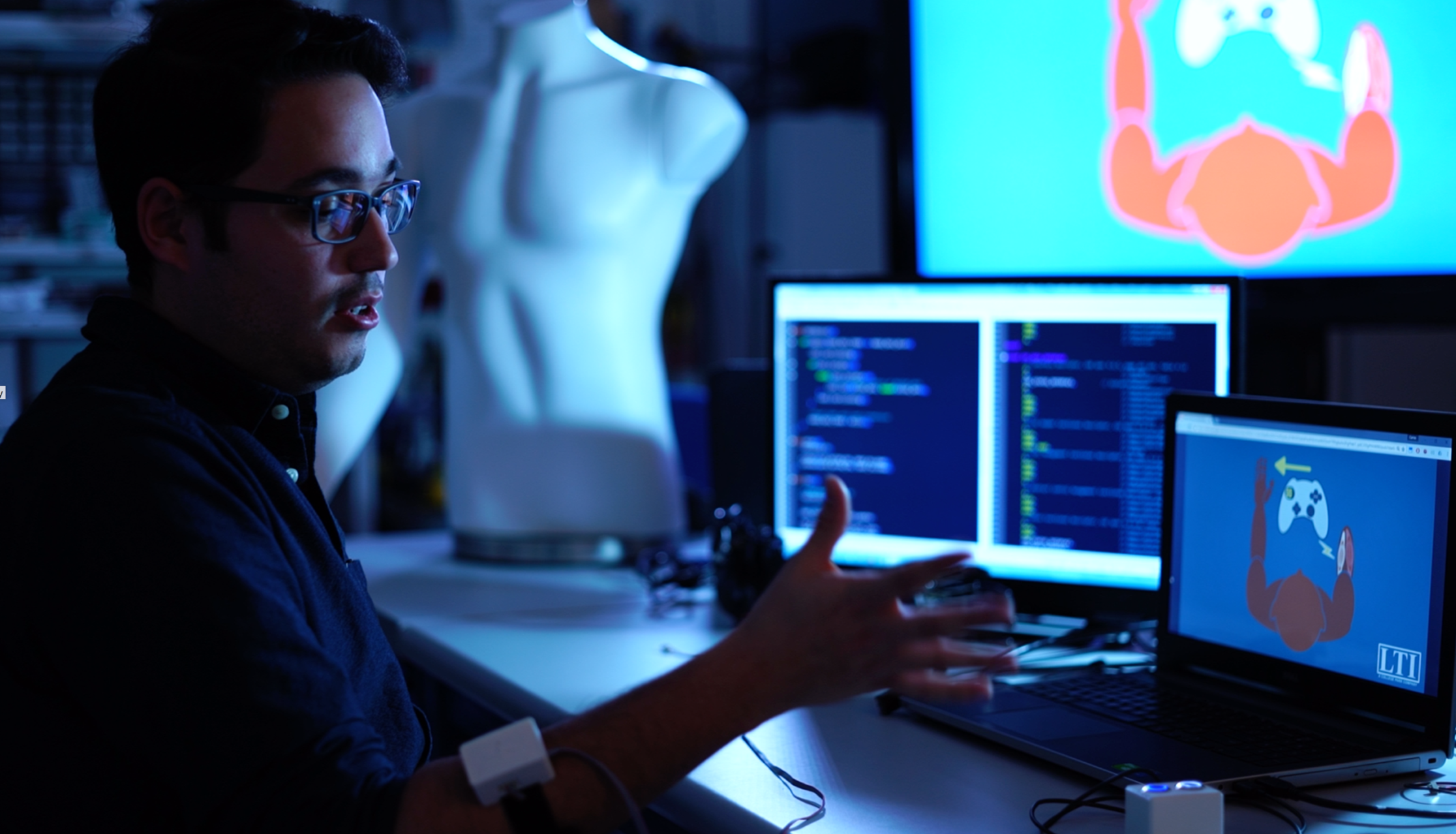 Reliable control remains a limiting factor in clinical deployment of upper limb prostheses [1]. Upper-limb myoelectric prosthetic fittings are often not successful and are eventually rejected because the prosthesis doesn’t provide the functionality that the user expects. While several factors may contribute to this, a likely cause is a lack of adequate training on how to best use the prosthesis.

Myoelectric training is an important part of a new patient learning to control a prosthetic limb [2]. However, the amount of time an individual can spend with an occupational therapist (OT) is limited. Without proper training, users can’t reliably create suitable myoelectric signals and often fatigue quickly, further negatively affecting their prosthetic performance. In addition, if an individual does not have enough muscular endurance, much of the limited OT time is focused on developing strength and coordination instead of on the performance of functional activities. Learning how to perform functional tasks, such as how to hold a fork, are vital to the prosthesis being an effective tool for the patient.

The lack of sufficient training on the use of a new prosthesis may be due to a lack of healthcare funding, but also is likely due to a lack of appropriate training tools. Ideally, patients would be able to develop muscle strength and coordination from home, so that the limited OT time can be focused on ways to most effectively complete activities of daily living (ADLs). An excellent review of current commercial and research training technologies [2] highlights their benefits and shortcomings. Current technologies have substantial room for improvement, as they are generally (1) too simplistic, (2) not motivating, (3) expensive, (4) manufacturer specific and (5) cannot leave the clinic to allow for independent use by the amputee within their home.

What is MEGI and How Does It Work?

o address some of these issues, we aimed to create a myoelectric training device that was portable, affordable, and motivational to help improve patient performance on functional outcomes. LTI/College Park have developed a device we refer to as the Myo-Electric Gaming Interface (MEGI). The MEGI maps myo-signals typically used for prosthesis control to video game inputs for myoelectric training. The design leverages existing, and highly engaging, video games to provide a motivational platform that patients want to use. We believe that patient compliance will be increased by having engaging graphics, levels of increasing complexity as the users’ skills progress, and a competitive, social environment in which to train. 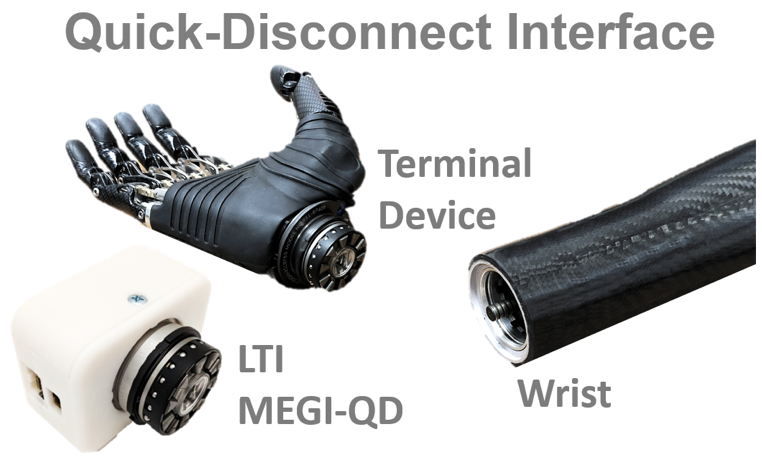 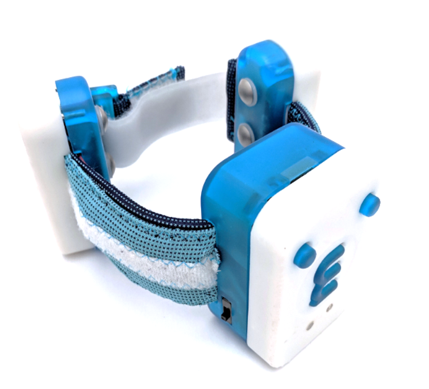 The MEGI exists in two form factors: one that interfaces with a standard quick-disconnect wrist and another that is an armband. The quick-disconnect wrist connects with the patient’s everyday socket and uses the same myo-sites that they will use during normal prosthesis use. The arm-band form factor exists for 1) prostheses that may not be compatible with the QD version, such as those with certain hand/wrist control strategies or higher-level amputations, and 2) new amputees that do not yet have a prosthesis. The pre-prosthetic phase is an ideal time to learn and sharpen control skills and is crucial in adopting good control habits as well as building confidence and competence for acceptance of the device [2-4].

MEGI Is Not Just Fun—It’s a Clinically Relevant Tool.

While playing video games is fun, we wanted to make sure that patients get functional benefits from their training and are not just turning into couch potatoes! One aspect of the MEGI that we believe is critical is choosing game play modes that are as clinically relevant as possible.

Proportional Control: For example, good proportional control contributes to more efficient grasping and manipulation, as well as more accurate control of grip strength. One way MEGI trains proportional control is by mapping the myo-signal amplitude to how hard a joystick would be pressed. In the case of car racing games, a smaller myoelectric signal from the user is mapped to steering the vehicle gently in a given direction. As the user’s signal amplitude increases, so does the degree of turning the steering wheel in the video game. So, while the user is thinking ‘gentle right turn’ in the video game, they are practicing ‘slow hand close’ in the prosthetic control realm. 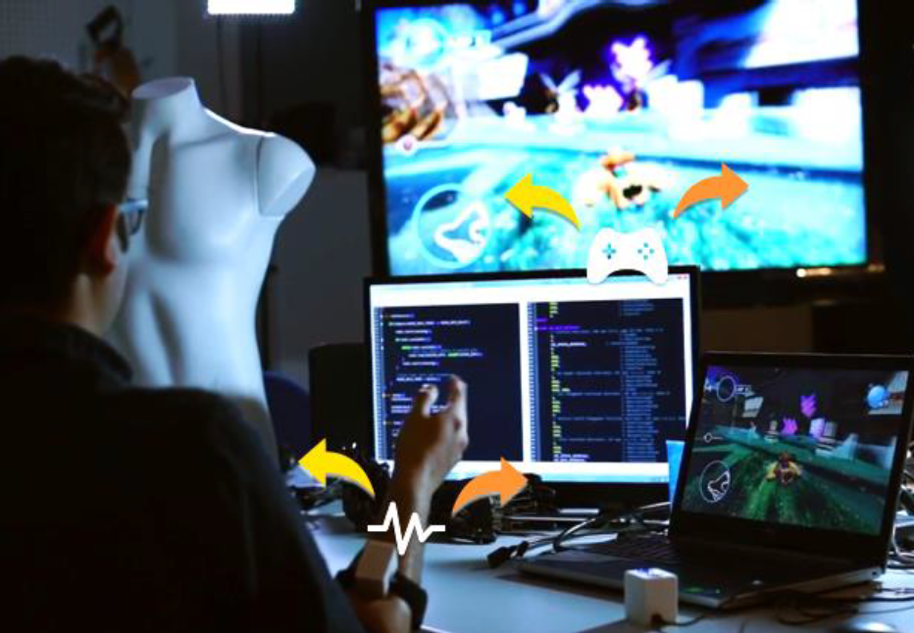 Co-Contraction Switching: Control of multiple devices (e.g., a hand and a wrist) with two EMG sites requires switching events. These events require precise co-contraction of both muscles at the same time or other pulse events. These signals are not typically used repeatedly in rapid succession, but when needed, they require precision and accurate timing. Generation of co-contraction signals is one area that users of two-site myoelectric control often struggle with most.

MEGI maps co-contraction events to button presses that are used periodically in game, but not repeatedly to the point of fatigue. Returning to the racing game example, we often map co-contraction signals to the driver firing their weapon or using a special item during game play. We think that it is way more fun to practice your co-contractions when they lead to you blasting your opponent out of the sky!

We’re about to start patient testing with the MEGI to quantify how myoelectric training improves prosthesis functional performance over a 6-month period. If you know of patients that would be interested in being a test subject, we’d love to hear from you! The ideal test subject will be a recent trans-radial amputee that uses two-site myoelectric control, located in New England, and be familiar with video game technology. However, anyone who uses two-site myo control of upper-limb prostheses is encouraged to contact us if they are interested in participating. Please have them email me at [email protected] and we can send them a recruitment flyer!

Todd Farrell is the Director of Research at Liberating Technologies, Inc. This is College Park’s research hub in Holliston, MA. He leads a dedicated team that has received multiple government-funded grant awards from the Department of Defense, National Institutes of Health, Department of Education, and Department of Veterans Affairs. He received his Ph.D. in Biomedical Engineering from Northwestern University in 2007 with a focus on myoelectric control of upper limb prostheses. His current research interests focus on using technological solutions to address various challenges in the field of orthotics and prosthetics. Todd and his team at LTI play an integral role in College Park’s continued growth and innovation. We are thankful for their creativity and expertise!

“The most rewarding part of my job is getting to develop a wide variety of cutting-edge technologies that have the potential to improve the quality of life for individuals with limb loss.”